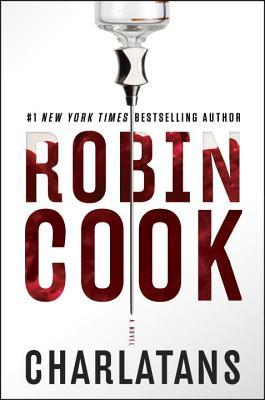 Charlatans is based on a fascinating premise about fake doctors who use the wealth of information available on the Internet to convincingly (and frighteningly!) pass off as professionals.

I chose the book solely because it was written by Robin Cook but I felt quite let down. The narrative begins well, hooking the reader’s interest. The buildup is such that you really want to know what the truth is about Dr. Ava London. But the denouement was so disappointing because the mystery was really no mystery at all. Towards the end, it became obvious because Cook devoted so much time to get to it and gave away so many hints. There were plenty of illogical twists and turns that didn’t seem to serve any purpose other than to confuse the reader or try to throw him/her off the scent.

The introduction of Gail Shafter and the other aliases did nothing to clear the confusion. In fact, it was a sort of mindbender because it took time to figure out where these fake profiles (or were they real people who cyberbullied the real Ava London?) fit into the picture.

Noah Rothauser appears to become a weak character after portraying a strong front in the beginning. If he was really wedded to medicine, why would he fall for the charms of London, especially when he didn’t fall for other, equally attractive women? And why would he continue to want her desperately despite her antisocial behavior? It doesn’t make sense.

Initially, I thought the book was about the dangers of cyberbullying and the use of fake profiles on social media platforms like Facebook and how they have the potential to destroy lives. Cook brings home the frightening reality that we are possibly harbouring psychopaths at every street corner who are seemingly normal, happy, well-adjusted individuals.

Later, though, the story moves on to London’s grave deception–the result of which were the multiple unexplained deaths during routine surgical procedures. What’s scary is that if smart quacks with encyclopedic knowledge can fool entire medical boards into thinking that they are certified doctors, then what hope do we, the common people, have?

It really got me thinking–are the framed certificates in my doctor’s chamber genuine? How do I know for sure when these “charlatans” can outwit even medically-qualified professionals?

What do you think?

This site uses Akismet to reduce spam. Learn how your comment data is processed.

Hello, Welcome to my blog! I'm a freelance content writer and book reviewer. My favorite genres are historical fiction and murder mysteries. I'm fond of writing research-based content. My blog is an unlikely mix of honest book reviews and articles on topics that interest me. I don't like to rate books because I believe every book has something to offer.